All Photos by Nick Green www.birdinginchina.com 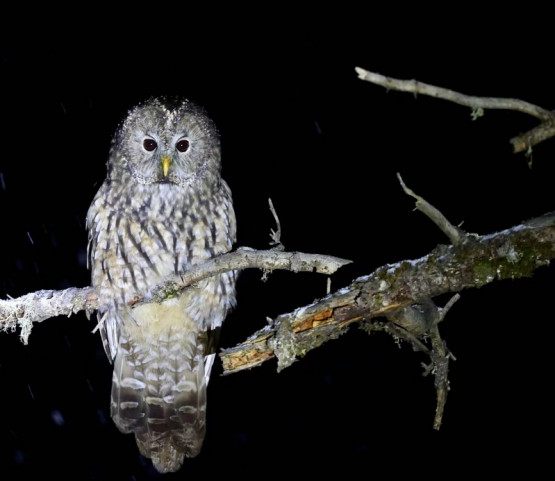 Recently, I had the pleasure of travelling with Nick Green, http://birdinginchina.com, my third trip helping with his quest to create a, near as possible, complete collection of China bird portraits and achieve the birding grand-slam of fully photographing China’s 96 endemics. Such is the huge variety of China’s prime bird habitats that his project has included snowbound Manchurian Steppe, rarefied Tibetan mountain passes, Sichuan’s primeval giant panda forest, the scorched Goby Desert, pelagics in the Bohai Sea and the lush rainforests of China’s subtropical southern borders. Now over 1000 species with only 9 of the endemics to go, the finish line is getting closer, and thousands of China travel miles are paying dividend.

Working with Nick is a demanding task, he’s not the guy wanting any old picture that ticks another bird off the list – that’s just not his style! Those photos must pass his personal quality criteria, which sometimes results in hours, days, and even weeks of repeat visits rephotographing those species where past attempts lacked the clarity and artistic merit he demands from his work. If Nick wasn’t such a nice guy, I’m sure a guide or two would have tossed him off a cliff after going through the rigmarole of, yet again. finding some obscure and skulky bush warbler just to be told he needs it again, because an eye isn’t sharp enough or five millimetres of tail is obscured by a small blade of grass.

However, the pursuit towards photographic perfection, which drives his poor guides close to the edge of insanity, also results in some of the clearest photographs of rare and badly known species. Images going beyond being just another pretty picture to useful ornithological resource and even evidence in discussions over speciation and taxonomy.

Sichuan is a renowned birding hotspot, especially where the eastern edge of the Tibetan Plateau, an area of rugged mountain range abruptly rises from the flat Sichuan plain. Here, an altitudinal patchwork of varying landscapes combined with the meeting of Palearctic and Oriental ecosystems results in a prime centre of avian endemism. Further ingredients to this rich evolutionary soup include past periods of severe climatic change, which isolated species in restricted glacial refuges that formed in the steep ridge and valley topography – the cause of several species becoming disjunct from main populations, evolving in insolation, and now regarded as distinct sub or full species.

The trip focused on photographing three of these endemics – Chinese Grouse, Sichuan Jay and Pere David’s Owl – all uncommon with isolated Central China ranges, disjunct from similar sister species - Hazel Grouse, Siberian Jay and Ural Owl – that are widely distributed in much of Eurasia. The differences in morphology between the two Grouse and Jay species are distinct and Nick’s pictures show quite clearly how the Sichuan Jay is a darker copy, without the rufous plumage, of the Siberian Jay, while those of Chinese Grouse highlight how that bird’s black barred breast pattern differs from the Hazel Grouse’s rufous crescents. 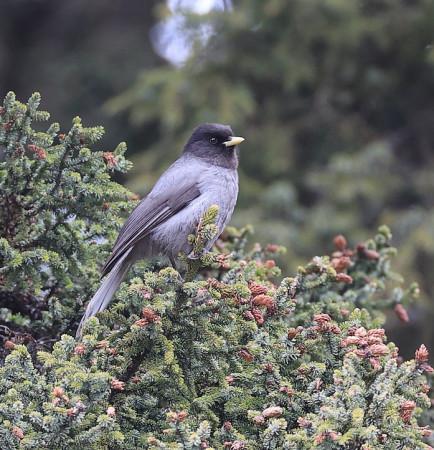 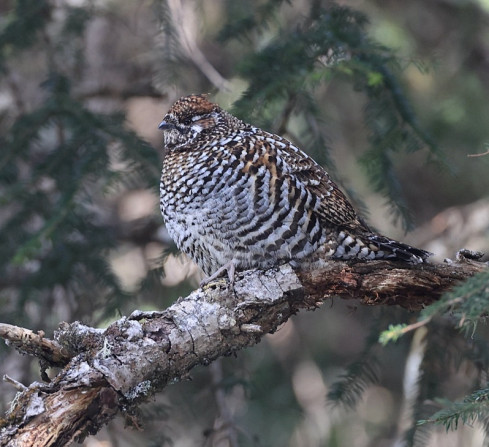 However, differences between Pere David’s and Ural Owl are more subtle and separate species status is a debatable subject. With plumage differences one of the factors in splitting, any high-definition photographs of, uncommonly seen, Pere David’s Owl, can be valuable additions to the discussion. 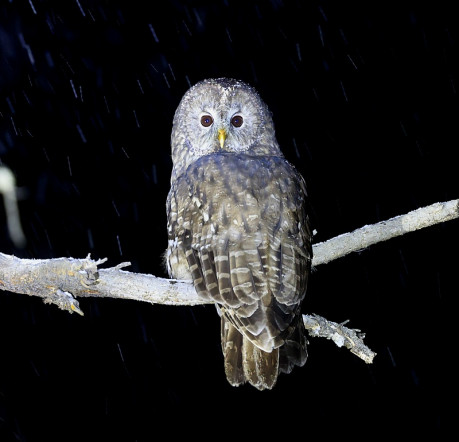 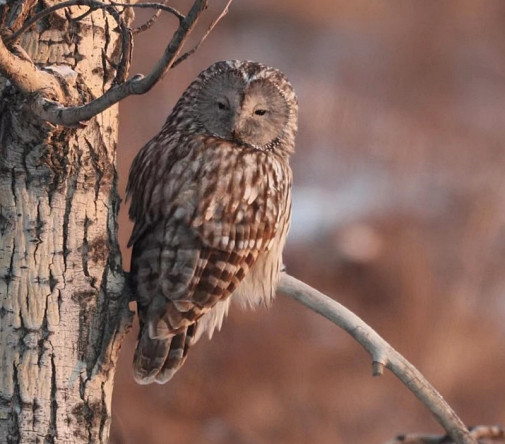 The most recent and authoritative paper on the species: Revised description of Pere David's Owl Strix davidi based on field observations in Central China (Scherzinger et.al. 2014) gives detailed field and specimen descriptions, with the work comparing plumages to the various subspecies of Ural Owl. Scherzinger et.al, on grounds of plumage and distribution, recommended giving the owl species status. It had formerly been recognised as a race of Ural Owl. This recommendation has been taken up by major taxonomic listings – among them IOC Clements.

China distribution of Ural Owl is confined to the far northeast of the country, over 1,000 kilometres from the most easterly Pere David’s sites. The subspecies involved, nikolskii, is described as lighter, smaller, and more delicate than Pere David’s, something which Nick’s photographs, can clearly confirm. However, with a distribution from Japan in the Far East and westward to Scandinavia and Central Europe, there is marked plumage variation within the eight recognized subspecies – some of which, like the Balkan subspecies macroura, are large, dark and generally similar to Pere David’s. According to Scherzinger et.al., an important aspect of plumage that is unique to Pere David’s are the central tail feathers that lack distinctive barring and, in some cases, being totally plain. 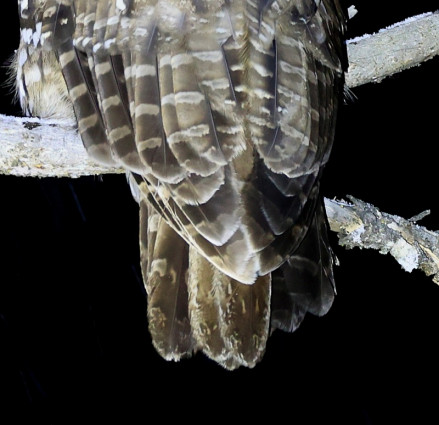 The plain central tail feathers of Per David's Owl

Correspondingly, Nick’s photographs, clearly confirm a lack of barring and general lack of standout features. The images also give a clear portrait of an alert bird where the facial disk appearance varies according to the Owls the state of excitement. Taken during a period of playback, our images portray a wide-eyed bird whose facial feathering renders the facial disk at its largest and most oval.

Suggestions have been made that Pere David’s facial disc contains a pattern of concentric rings reminiscent of Grey Grey Owl (Mikkola 2012), while Scherzinger et.al noted a couple of birds that showed some inconspicuous radial streaks in the lower face. Both Nick’s night-time and some 2020 daytime photos, from the same site, cannot show any marked concentric disc patterning – the facial features in our opinion looking far more like that of Ural Owl than Great Grey. 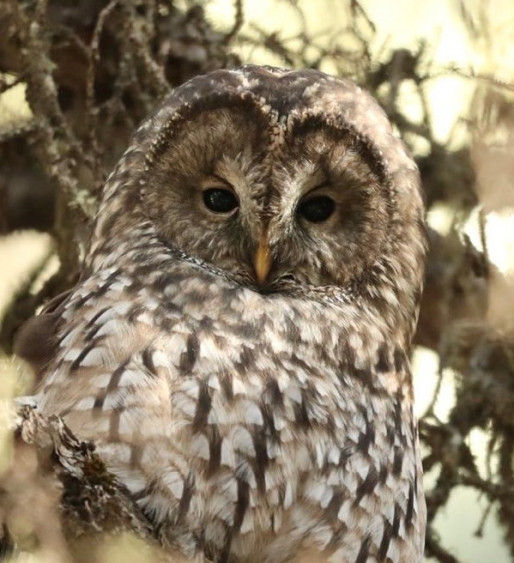 What is more obvious in the images is the faint barring over the breast stripes – a feature not shown in the nikolskii Ural Owl and shared by few Ural Owl subspecies. This feature is most apparent in the 2020 daytime shots. Scherzinger et.al describe the strength of barring as a variable feature between individual Per David’s Owls, which is backed up by online photos. When taken together with variability of facial and head markings, these features become a way of identifying individual birds. Taking both head and breast plumage features into account, the variations in photographic artefact between daytime and night-time photography, its seems that plumages for the 2020 and 2021 birds strongly match and suggest images are of the same bird. 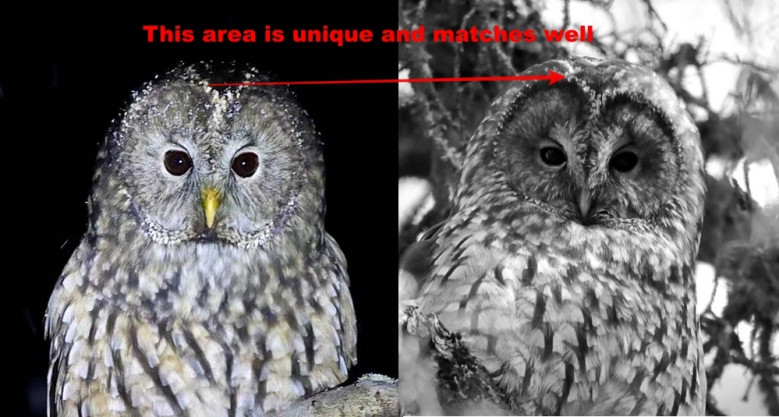 Comparisons between the 2020 and 2021 birds - accounting for for the vast lighting differences, certain features match up well and indicate the same bird

With plumage and calls showing similarity, prolonged geographic isolation becomes a major factor in determining Pere David’s species status. Scherzinger et.al. wrote – In recognition of the long period of time that the owl has lived in total isolation in the mountain forests of Central China, the status of a discrete species Strix davidi now seems justified - which, without further detailed research being available, also seems the main justification for the bird being included as a species on both IOC and Clements lists. It is interesting to note, isolation has also occurred for the three Ural Owl subspecies that are endemic to the Japanese Islands – japonica, hondoensis and fuscescens – but they remain classified as a subspecies of the main Ural Owl complex. It is also interesting to consider how total that isolation may have been. Chinese records, with the bird formerly found around Beijing (Birding Beijing 2021) and references to distribution reaching as far south as Shandong Province, areas hundreds of kilometres closer to Pere David’s than present populations, indicate the population has a shrinking distribution.  It has also been suggested that geographic isolation meant that Ural Owl would have had to cross the Gobi Desert to reach Central China (Mikkola 2012). This is true of Mongolian populations, but for birds in North-eastern China, a clear overland corridor exists through highland areas, that historically must have contained areas of suitable forest habitat, from Hebei through Shanxi, Shaanxi and into present Pere David’s Sichuan and Gansu distribution.

Distributions of Pere David's and Ural Owl in China

According to phylogenetic research, present day geographic Isolation doesn’t always lead to species status. This is aptly illustrated by another trip bird, the Central Chinese subspecies of White-backed Woodpecker Dendrocopos leucotos tangi, which found as a Central China endemic, of similar range to Pere David’s Owl, also has an isolated island of disjunct distribution from the main Eurasian distribution that comes closest in Northeast China. White-backed Woodpecker has 14 subspecies, and tangi, with its strong breast striping, which in both sexes form solid black patches, strongly differ from the less marked nominate D. l. leucotos. The portion of white back plumage is also noticeably smaller, and these features were well illustrated in photographs taken just two days after the Owl encounter. 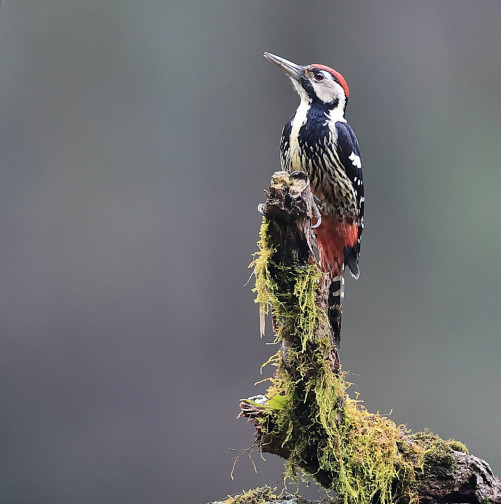 Discussion over tangi’s status as a possible species split differs from that of Pere David’s Owl in that the White-backed Woodpecker complex has been subject to phylogenetic research (Pons et. al. 2020). Despite several subspecies being found as isolated populations, the study’s results suggested a possible split for just the Southern European lilfordi, with tangi, judged to not have enough genetic variation from the nominate, remaining within the complex.

With the tangi subspecies of White Woodpecker and Pere David’s Owl having similarities in areas of disjunct distribution from main ranges of sister species and subspecies, it would be easy to conclude that isolation had resulted from corresponding events. However, we cannot assume a repeat pattern for different species, and disjunct populations of various species existing in the same area isn’t an indication that their isolation has lasted for equal periods. With at least five global Ice ages, which can be considered a typical occurrence to separate populations, periods of isolation may differ between species depending on which event was the cause and whether isolation has been broken by an intermediate period of recolonisation and mixing with outside birds. This means that isolation experienced by Per David’s Owl may have been caused by an event that preceded or followed that which isolated the tangi population of White-backed Woodpecker and the last contact with other subspecies may have been a relatively recent event for one, while further in the past for the other. Since a greater period of isolation must lead to a greater chance of eventual speciation, mitochondrial analysis, measuring isolation through genetic divergence, becomes an essential part of determining a bird’s genetic lineage and whether it justifies species status. A study that determines how long those periods of isolation have been – which, Scherzinger et.al. have, without detailed research, assumed is long enough for Per David’s Owl to become a species, but pons et. al., after phylogenetic study and comparing genetic linkage with its closest relatives, have concluded is not enough for tangi.

We will have to wait for a corresponding study to be made for Pere David’s Owl – which leaves us with plumage, vocalizations, and an unspecified degree of isolation as the main, but surely not the most conclusive, indications of species status. Further work is of particular interest, since other Sichuan birds have similar disjunct populations, examples being Boreal Owl Aegolius funereus beickianus, Black Woodpecker Dryocopus martius khamensis and Eurasian Three-toed Woodpecker Picoides tridactylus funebris. Ornithological research not only helping explain speciation but throwing light on how effects of former climatic events might have shaped present Central Chinese avifauna.

Until then, I’m afraid, considering a bird as a species often comes down to which world birding list we are following, but at least we know that in helping provide valuable images in the quest to better understand and explore Central China’s endemics that there’s also worthy scientific purpose behind Nick’s torture of those poor bird guides – making bird photography not just a pretty picture. 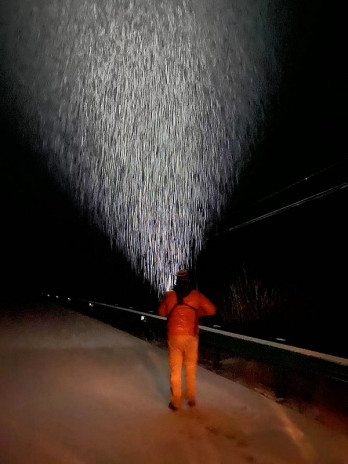 Out in snow after Pere David's Owl

Beijing Birding, 2021, The Status of the Birds of Beijing, https://birdingbeijing.com/the-status-of-the-birds-of-beijing/