Books and Other ID References

Two new Chinese field guides have recently been published that more than compliment the rather dated MacKinnon and Phillipp’s English language field guide.

What is important with these two guides is that they include current splits, have excellent plates, include common English Language/scientific names with the plates, species are arranged in current common taxonomical order and, last but not least, both contain an English language index. What they don’t have are English language descriptions of plumage, habitat and distribution. However, both have small range maps, with one of the books having maps that show province borders, which are very useful when trying to orientate to a China bird trip route.
Both books are as bulky as the Mackinnon guide – you’re not going to get a small handy field guide when working with China list of over 1,400 species – and both come at a far cheaper price. 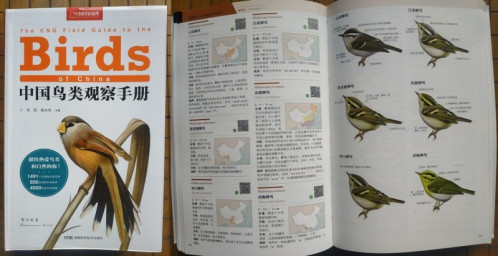 Out of the two new books this is the most outstanding. A work fully up to the standards of western field guides it fully deserves an English language edition. But even as a Chinese language book the quality of the plates makes it an almost have to have edition for any visiting birder. The plates are so good that they actually become a bit of frustration since distinguishing identification features are arrowed, but the written explanation of those details are all in Chinese. However, the arrow is still of use when the feature is obvious such as leg colour or easy to spot plumage variation, but a little cryptic with more subtle variations. The index section is also very easy to use – three indexes: Chinese, English and scientific. The main drawbacks are arrangement of text to plate – species description on left-hand pages with the plates on the right. The English name is only given with the description the species names with the plates are only in Chinese. It would have been great if English names were also included with the plate or there had been some sort of numbering system so finding the English name on the relevant description would be easier. However, descriptions match the placement of the species on the plates – in most cases both are arranged in two columns so the top left-hand description matches up to the top left hand plate and so forth. Another annoyance is lack of province borders on the distribution maps – borders make it far easier to orientate with regard to trip routes.
The other great thing about this book is price – at 128CNY, under £15/US$20, its bargain basement stuff!

This is a monumental piece of photographic work – every Chinese species photographed, mostly by Nie Yan Qiu. The photographs have then been edited and filtered, so that birds, cut out from the photo background, and filtered/edited so as to produce similar lighting effects, resemble traditional plate illustrations. The effect gives very reliable identification illustrations that in most cases fully capture a species’ “jizz.” However, the drawn illustration of CNG have that advantage that the bird can be shown in position that best displays an identification characteristic. But both books are far more effective at illustrating species than the MacKinnon plates – especially when it comes to the Leaf Warblers and the Rosefinches. The Illustrations in this book are together with the English name so no problem regarding putting the two together. The other great things are distribution maps with provinces and another very usable English index. The price of this book is 298CNY - around £33 or US$46.

To get a copies of either book please contact Sichuanbirding at This email address is being protected from spambots. You need JavaScript enabled to view it.

The Oxford University Press, A Field Guide to the Birds of China by John MacKinnon and Karen Phillips used to be the only field guide that solely covers China - and is the only English language field guide. Although a paperback It’s big, heavy, expensive and outdated (many of the species have now been split) – some of the illustrations are of questionable (obviously painted from specimens rather than field experience – and a few new splits have no plate). But it’s still a masterwork, since it fills a total void!!!!! This book is near essential because the decriptions of the species are generally excellent, with many of the splits being mentioned as subspecies. When used in tandem with one of the two new Chinese guides it makes a formidable identification tool.

Heres’s a link to the Wildsounds listing for this book

For those who want just the plates from this book there’s a much cheaper Chinese version that has an identical plate section – where the names are in English and Chinese. The rest of the book is in mandarin – so the idea with getting one of these versions is that you can cut it in half and just take the plates out birding (when you feel the weight of the complete book you’ll realize the sense in this suggestion). Since the price is around a fifth of the western version – this is not an expensive project -  but I’m afraid you’ll have to use us or another Chinese contact to get your hands on a copy!!!!!.

Another book of interest is the Helm Field Guide, Birds of East Asia by Mark Brazil.

This book covers a lot of birds found in Sichuan – and has good plates that can give Sichuan birders some useful help. For example the plates on Phylloscopus Warblers are larger and clearer than Mackinnon – and even though these also can contain mistakes – they nudge you in the correct direction. But the problem of missing species can be a pain – since those Warbler plates lack birds like Emei Leaf, Plain-tailed and Grey-crowned.

The other big minus for Sichuan use is the distribution section doesn’t handle on Central china or Sichuan distribution. The only real way to use this book is in tandem to MacKinnon

Another very useful reference guide are internet images at OB images (Oriental Birding Club). Although this resource isn’t always a practical tool when out on a trip, it makes for a useful reference when, back home, particularly if you’ve taken bird photos.

Here’s the link to OB images

There are two website that have brilliant collections of calls and songs – Xeno-canto and AVoCet Avian Vocalizations Center.

Xeno-canto is the biggest site – and you’ll find most of your Sichuan calls in here.

For mammals the one major illustrated reference work is – Princedown Press, A Guide to the Mammals of China by Smith and Yan Xie. Another big expensive book – it looks very nice – but omits illustrations of some important species (only 1 Goral out 3!!!!!!!!!!!!!) – but again it’s the only book out there and a good one。

The Wildsounds listing for this book