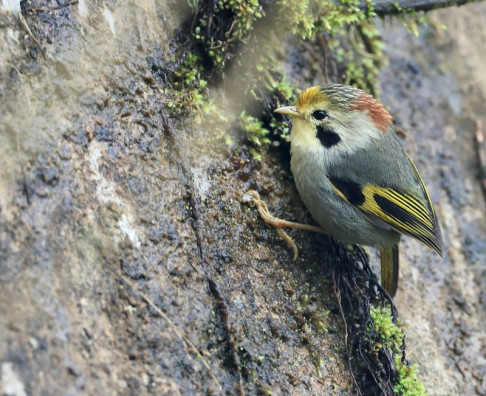 Can't call this one of my favourite birds but this enagmatic little rarity is much sought after Sichuan speciality. I've seen it many times, but its often been one of those species that has the knack of turning up when not needed and hiding away when it is. My first contact was especially comical. Way back during 2008, and guiding on Erlang mountain in a rain storm when our drive was interupted by a deep mudslide. Sinking almost to my knees, while checking out the track, and not being able to move, two small rain soaked passerines flew past and landed just a a metre or so from my muddy predicament - luckily because bins were still in the car, and even luckier because they were a pair of Gold-fronted Fulvetta!

However, to see is one thing to get good photos is another. I have had trips where we have been lucky - I once called one in at almost first attempt - but have had another trip where we had 11 hours of contnous watching just to get a brief view for a tick. During February 2022 I guided for Nick Green during his project of getting complete set of Chinese bird photos http://www.birdinginchina.com/ - he needed the elusive Fulvetta. We had already tried during December, had seen the bird on several occasions but not been able to get any kind of decent photo. This trip was going the same way, but then on the very last day with us about to give up - on on our very last run with the car a flock of Ashy-throated Parrotbills flew across the road and landed to feed on plants growing on a concrete wall. Among them were multiple Gold-fronted Fulvetta - pile out of the car, get camera set up, make sure to know where birds are, machine gun sound of camera on burst, me hoping Nick can see that close bird right out in the open - phewwwww 20 seconds of maddness the flock has dissapeared but we have that photo, at last a realy good one - mission accomplished.