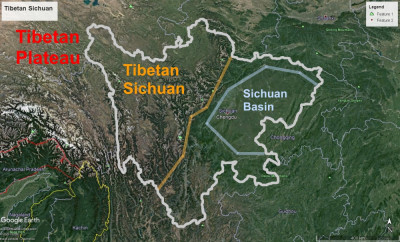 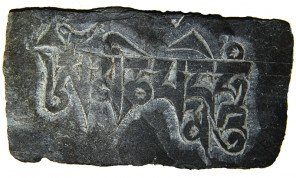 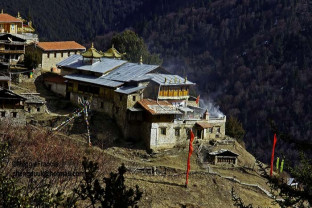 Around half of Sichuan’s areas is taken up by the south eastern corner of the Tibetan Plateau. The border of this geographic feature is easily seen on a satellite image as a line of mountains, part of the Hengduan range, which make up the western boundary of the flat, agriculturally rich and densely populated Sichuan basin, and the foothills of the Tibetan Plateau. On the western side of these highlands lies a high-altitude landscape, predominantly characterised by montane grassland – the Tibetan Plateau. Wolong lies just on the eastern side of this geographic Tibet/China border but already the inhabitants here associate their traditions and culture with Tibetan. The further west you travel the language, written script, costume, and physical looks of the people change until you are in areas where nomadic yak herders, Tibetan Buddhism, prayer wheels, stupa and yak butter tea are all the norm. 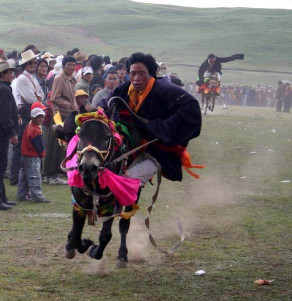 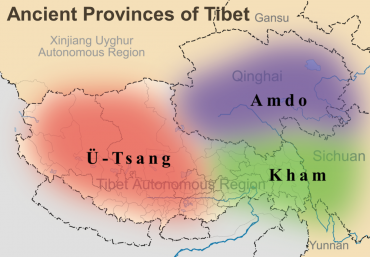 Tibetans in Sichuan differ in Tibetan language, customs and traditional dress from those in Lhasa. Historically, before this part of the Tibetan Plateau was incorporated into Sichuan, this area was part of the ancient Tibetan province of Kham and its people are known as Khamphas. The men had a tradition of being fierce warriors and skilled horseman, and today they still show off their skills in riding and archery contests. 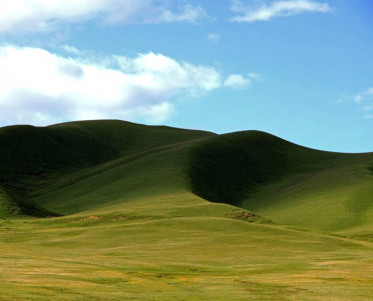 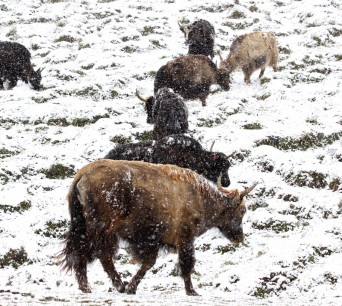 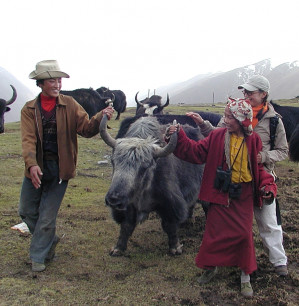 Huge areas of rolling grasslands have traditionally been one of Tibet’s most important resources. Here millions of Domestic Yak graze and their population outnumbers humans in the region of ten to one. In historic times horses from the grasslands were a lucrative trading item to be exchanged for tea, with the trading routes between Sichuan and Tibet known as tea-horse trails. Wolong, just on the western side of the Sichuan basin, but still inside an ethnic Tibetan area, would have been an important staging post in this kind of trade. There would also have been Wild Yak – a much larger animal than the farmed variety – but today only few thousand survive in neighbouring Qinghai Province. Today, Domestic Yaks have taken over from horses as the main source of farming revenue. Traditionally yaks have had a value for dairy products, especially butter, which, in a rancid form, can be a main ingredient of Tibetan tea. Butter is also the overwhelming fragrance in a lot of Tibetan temples, but not on any slices of bread, instead being used for fuelling lamps and making religious sculptures. However, today beef hungry China is the major user of yak production, and China’s newfound wealth has made yak farming such a profitable business that grassland overgrazing is now a major problem. 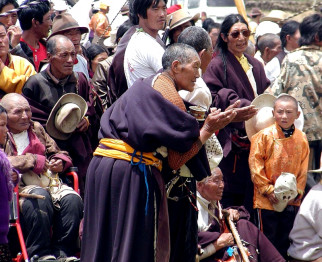 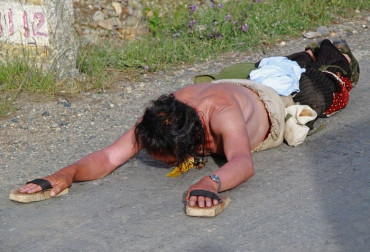 Religion, in the form of Tibetan Buddhism, could be seen as the glue that holds Tibetan culture together. Temples and red-robed monks and nuns are seen everywhere. Prayer-wheels both at the temples and smaller shrines are popular gathering places. But a word of warning, make sure you go round, both when inside and outside the building, in the correct clockwise direction. The author once failed on this simple task and received a hefty whack on his backside from an elderly woman and her walking stick – a lesson he’s never forgotten! That woman could well have been a pilgrim. Walking large distances to important temples or religious gatherings in the pursuit of enlightenment, karma, and better path of reincarnation. Some of these pilgrims making the task even more challenging by prostrating themselves every few steps onto the ground. 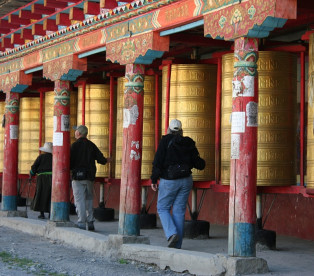 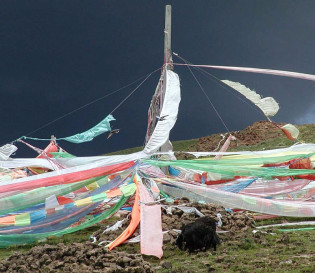 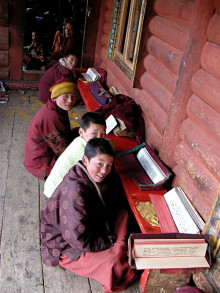 Prayer wheels and prayer flags are plentiful in Tibetan areas. On them are written religious mantras, the most common being om mani padme hum. These are inscribed using Tibetan script, which, unlike logographic Chinese characters is a phonetic alphabet of 30 letters and has its origins in India. This mantra can also be commonly seen on carvings on cliffs or stone piles. Spinning a prayer wheel, hoisting a prayer flag, or carving a mantra on stone will all have the same effect as verbally repeating the prayer – beneficial for a good karma and reincarnation. Families often send a son, usually the youngest one, to be a monk. This not only on religious grounds but also has the practical benefit of avoiding future disputes when a family’s property is eventually divided between the male siblings. Young monks can start their education at around six years old and part of that process is to memorise religious scripts. The sound of a Tibetan monastic school is of classes endlessly reciting texts. There are various forms of Tibetan Buddhism and types of monastic life. In some monasteries monks are celibate while in others they can marry. 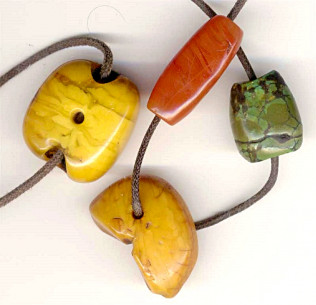 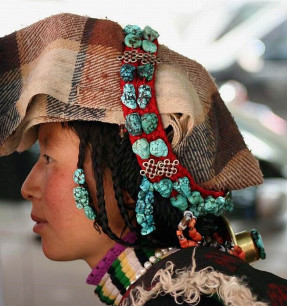 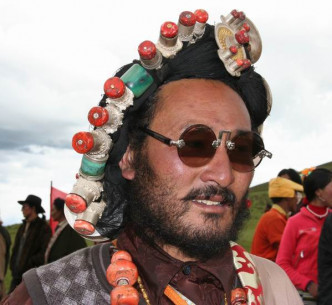 In traditional costume the men and women often wear jewellery of amber, turquoise, coral and carnelian. The sources of these items are not found in Tibet and their presence in historic times are evidence of trading ties as far away as Europe when amber from the Baltic regions was traded in the Indian subcontinent and subsequently found its way to Tibet,while corals would indicate trading routes that streched down to tropical coastlines. 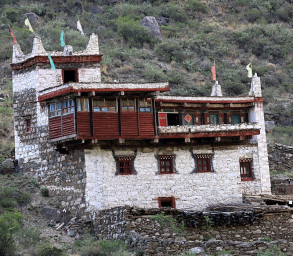 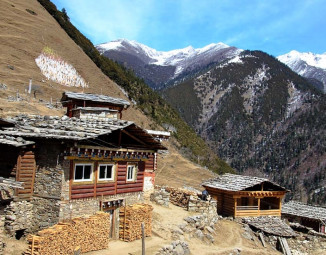 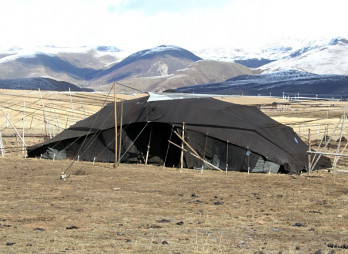 Tibetan architecture also has its own unique beauty – an attractive, tough functionality that perfectly fits into a rugged, often challenging, landscape. From the stone walls of their farmsteads and temples to the black canvas of the traditional herder tents. 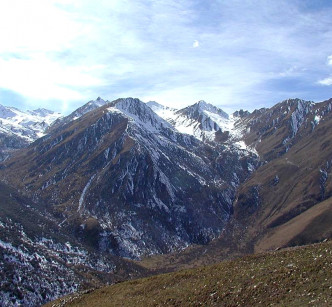 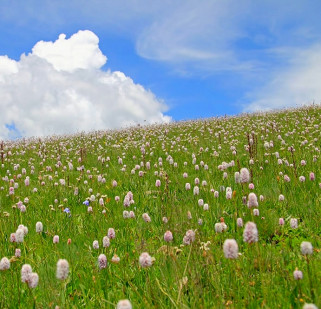 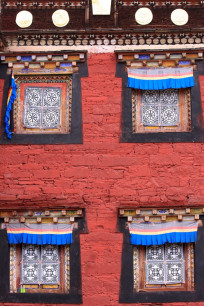 With its people, culture and natural splendour Sichuan Tibet must rank as one of the most photogenic spots on the planet.