Chengdu Culture and Tourist Sites
Gateway to the west, Chengdu, Sichuan's largest city and provincial capital, is a sprawling administration, financial and transport hub with International airport, important rail connections and a population of over sixteen million. It also has a rich historical and cultural heritage, which are represented in Museums, archaeological sites, historic temples, a unique local cuisine, vibrant night life and packed retail centres. Chengdu mirrors the breath-taking change of the last twenty years – modern, bustling, industrious, technological China – while still giving you a taste of the old.

Chengdu Museums
There are three major Chengdu museums that are worth a visit.

About an hour's drive to the north of central Chengdu is San xing Dui museum, the location of an excavation site, where relics from a lost civilisation – linked to the origins of Sichuan’s Shu Kingdom - have been found. This site, where exhibits are well displayed in a large, modern museum complex, must rank as one of the outstanding Chinese archaeological attractions. The exhibited artifacts are very old - carbon dating putting them from periods dating between the eleventh and twelfth century BC. Apart from their age, the finds are also unique, since the styles employed in their design are totally different from anything else found in Chinese art, and that the large size of some of the bronze castings show that the manufacturers used casting techniques, adding lead to a bronze alloy mix, that were remarkably advanced for the period. 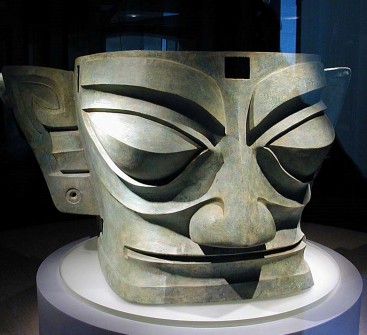 The Bronze head, pictured above, is massive - 4 or 5 adults would easy fit into to it - and its tall enough so they would only be visible from chest height up! What's so intriguing about the exhibits, are their sheer mystery. Apart from the finds there are no records whatsoever - not even through folklore or myth - of this utterly lost civilisation. Well worth a visit.

Located at Tianfu Square, the very centre of downtown Chengdu, its sheer size, impressive modern architecture and quality of exhibits make this a flagship site for modern Chengdu. The building houses many collections that illustrate Chengdu culture and society through the ages – these range from ancient relics to memorabilia of more recent history, dioramas of historic life and even an extensive Chinese puppet collection. Very conveniently placed close to Tianfu Square Metro Station it is an easy visit for anyone staying in Chengdu and admission is free. 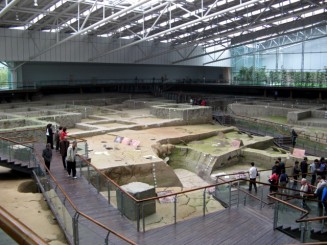 Like San Xing Dui, another Shu Kingdom site, where similar artifacts were discovered after a 2001 real estate development accidentally uncovered an ancient town. A large site contained within a park, it’s located close to Central Chengdu and an easy visit for anyone staying in the city.

Historic city temples offer an insight into the culture and art that has come to portray Chinese society and their design and architecture are a testament to the skill and expertise of former generations of craftsmen and artists. Many of these wonderful buildings have survived the onslaught of history, when so much else has been destroyed. Now, popular destinations for both local and tourist alike, they serve as peaceful areas of retreat from hustle and noise of city life.

At Wenshu, where the present buildings date from the beginning of the eighteenth century, you also have a chance to drink tea and eat from a purely vegetarian menu at the temple tea hose and food hall.
Wuhou was built in dedication to an ancient statesman of the Shu period (Three Kingdoms) called Zhuge Liang, and the present buildings were completed in the mid seventeenth century. Wuhou borders the popular Jinli Street tourist area.

Although not a tourist site, Sichuan cuisine, perhaps best represented by the rich variety of Chengdu restaurants, is a tourist attraction in its own right. Sichuan is the home of one of the most popular styles of Chinese cooking, Red, from liberal usage of Chilli peppers, is the dominant colour for many dishes, while garlic and unique tasting Sichuan Pepper are other main ingredients. Outside China, one of the better-known dishes is Kung Pao Chicken but, locally, far more popular is spicy Sichuan Hotpot. This is best imaged as a giant fondue eaten from a communal table with hole in the middle, that allows for a gas burner and pot, in which Cheese is replaced by a boiling oil/chilli/spices/vegetable mix, and a whole collection of foods mostly skewered on long pins and eaten after dipping in the pot and, if desired, further dipped into a spicy sesame oil based mix. Eaten in normal Sichuan mode, its pretty hot stuff – but for those who can’t take the heat, it also comes in a white non-spicy variant. Another interesting food concept is the common use of Tofu. The most famous tofu dish is Maopu Tofu – which has the delightfully appetising translation of grannies pockmarked tofu. Luckily not so many pock-marked grannies around today, but the dish is still very popular, and again can be ordered as normally hot-spicy or a far more tongue-friendly, laid-back version. One thing to remember with Tofu dishes is they often come with added meat. For vegetarians, as with all other dishes, you can insist on a no meat version. Noodles are also a Sichuan thing with a Sichuan flagship being the Dan-dan variety – boiled noodles mixed with meat/peanuts/chives and, yes, you’ve guessed it – chillies and a touch of garlic. Noodles are one of the traditional Sichuan fast-foods – commonly eaten by folk in a rush over breakfast and lunch time. Other quick, and popular with tourist, snacks include steamed dumplings that come in many different varieties. When ordering food in a Chinese restaurant don’t feel shy to wander around the tables and taking a look at what others are eating – it’s a done thing in China and an easy way both to order and get something that doesn’t come as a total surprise. Some clients are worried they may get served something they consider completely vile – like dog or cat meat. In practise there is little chance of this. Dog meat is an uncommon winter dish and China’s newfound love of pet dogs has pushed this into an ever-increasing fringe habit - while Cats are definitely not on any mainstream menus. However, offal eating is still common here – as it was in the west during the first half of the last century – and some may want to tell their guide that tripe isn’t for you!