Sichuan Panda Centres
Apart from the two Panda Centres in Wolong, there are four other Panda Breeding centres currently operating within Sichuan – the well known centres in Chengdu and Bifengxia, and the two relatively new centres at Dujiangyan.

Chengdu
Chengdu Panda base– otherwise officially known by the rather grandiose, Chengdu Research Base of Giant Panda Breeding, is located on the NE edge of Chengdu, around 10km outside central downtown. Without having an organised trip, the most efficient way of getting there is by taxi, since there are no nearby metro stations and busses, especially when a change is needed, can be complicated. Also allow yourself good time for those 10 kilometres, since the vagaries of Chengdu Traffic can more often that not play a factor in how long your drive will take. Hotels and hostels can easily arrange a taxi, and because there will be plenty waiting outside, no need to book one for the trip back. Information about transport to get you there can be found at the centre’s official website. 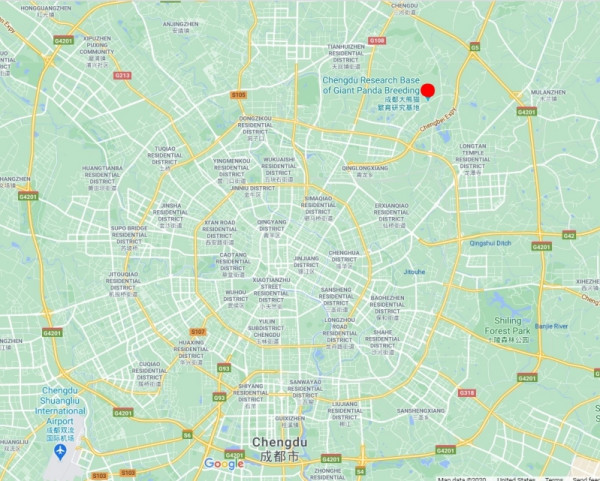 Chengdu is the busiest of all the panda centres – it’s the place that most Sichuan tourists, both national and international, head for when doing their round-Sichuan tour. During summer holiday periods this can mean bus loads of noisy visitors, especially during weekends, with the best viewing points sometimes being blotted out by the crowd. We recommend early visits – the centre opens at 7:30 - with animals often being most active early in the morning and as way of beating the worst of the tourist rush. Otherwise, it’s one of the most attractive and well appointed centres, with large well vegetated pens, big areas of parkland, decent sighs in English and exhibition areas. The centre was originally established in 1987 with 6 Giant Pandas to now more than 150 animals and has become the biggest establishment, taking on the mantle of leading centre for captive breeding research. One of the techniques developed has been the use of artificial insemination (article on panda insemination), which has also led to an increasing number of twin births, with Chinese scientists also experimenting with early weaning to further increase panda breeding performance. These techniques have also led to controversy with critics claiming that the resultant increased habituation to humans and “unnatural” early upbringing in the panda centres may also be a root cause of the difficulties experienced in trying to reintroduce captive born animals back into the wild. However, with Chengdu being so focused on breeding, it is the best centre to view very young cubs.

Pictures we've taken at Chengdu of the "high-tech" baby panda facilities, with a press photo of the results - certainly a long way from the bamboo covered hillsides of Wolong. Nowadays the young pandas selected for reintroduction into the wild are not og general public display and get a more natural upbringing while learning to live in the wild.

The centre also has a good number of Red Panda which are easy to view in spacious well vegetated pens, where you could get very close to the animals. With Covid restrictions in place the close contact may no longer be possible.

Covid has also affected the volunteer Giant Panda Keeper programs and other close animal contact opportunities – hopefully, it will be possible to reinstate these during the near future. 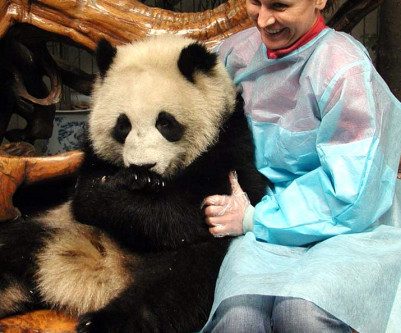 Like this, showing one of our past clients, there are many contact pictures from Chengdu - but holding a panda type photos were stopped at Chengdu long before Covid and look like remaining a thing of the past.

The centre also has exhibition buildings containing natural history exhibits – if you were to visit both these and watch and photograph the pandas then the Chengdu Panda Base can be made into a half day visit. For those who want to focus on just seeing pandas, without having to seeing every pen, not delving too much into the science of panda conservation or waiting for the perfect photo, a couple of hours should be enough.

Bifengxia Panda Centre lies 150 kilometres south west of Central Chengdu close to the city of Ya’an. Expressway routes mean that the journey takes around two-hours from Central Chengdu and Three from Wolong. From Chengdu, Xinnanmen Bus Station, there’s a Bifengxia tourist express service that takes you all the way. Otherwise, there’s a high-speed train from Chengdu West station (around an hour’s journey) and several buses from the main Chengdu bus stations that take you to Ya’an. From the city you have an extra 20 kilometres to the centre – which can be made by Bifengxia buses or a taxi. 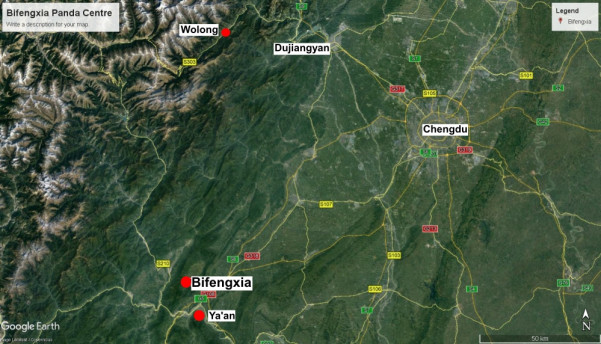 An expressway routes to Bifegxia are available both from Chengdu and Wolong via Dujiangyan.

The centre opened in 2003 and played an important role during the 2008 earthquake when many of the Wolong Pandas had to rehoused due to the destruction of their centre. It was first intended as a site where non-breeding pandas could be housed but developed to get its own breeding centre and over the years the number pandas have been steadily increasing with now more than 50 pens. Being placed in a large area of natural forest it’s a scenic site and the young pandas spend much time in the trees found in the large pens. 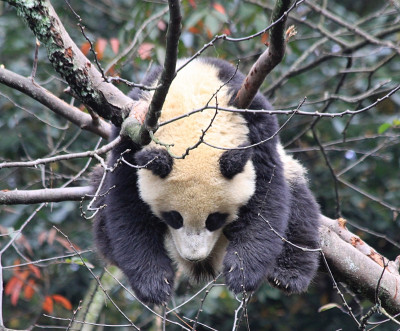 Its important to note that there are other tourist attractions at BifengXia. Tickets for the centre also gives access to a walkway through a steep sided rocky gorge with a small fast flowing river, waterfalls, moss covered cliffs and lush forest. Walking the three-kilometre riverside path from the carpark is nice way of getting to the Pandas – but be warned that it also involves some steep climbs on stairways, which can be slippery during wet weather and crowded during peak season or weekends. To avoid the walk, take one of the buses going from the carpark area to the entrance of the panda centre. There are also nice walking paths inside the centre and if you combined pandas with taking in the scenery Bifeng can be made into a whole day visit. If walking is not your thing there are small buses inside the centre that can ferry you between the pens and then Bifeng can be easily become a short 2-hour trip. The third attraction is a safari park, which has nothing to do with panda centre, and is not recommended. 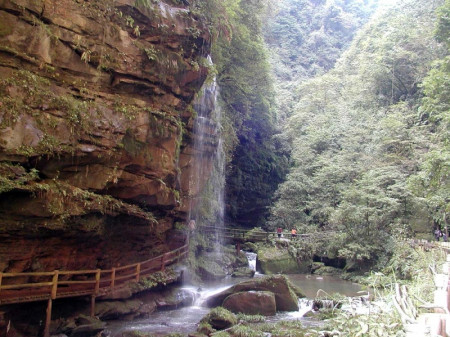 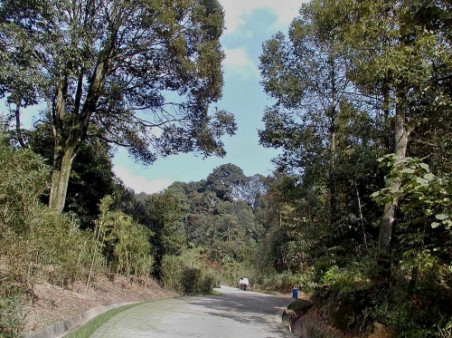 To get to the Pandas you have an option of walking three kilometres through a highly attractive gorge - the centre grounds are also very scenic with wooldland, bamboo and walking paths

There are two panda centres located on the outskirts of Dujiangyan. 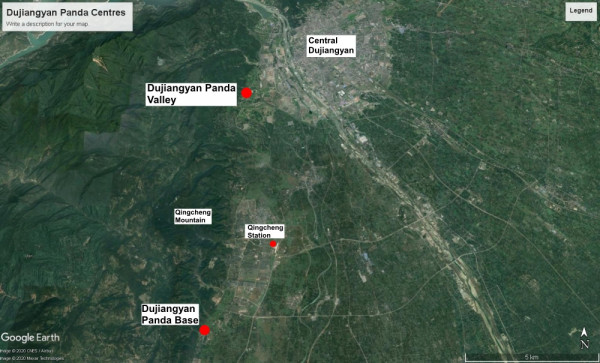 Dujiangyan Panda Valley
This is the centre closest to Dujiangyan Centre – but still a half hour’s drive from the railway or bus station which are both placed on the opposite side of town. This Centre specialises in training captive born into reintroduction projects. A new centre only open to the public from 2013 and like Gengda it is far quieter than Chengdu and Bifengxia. 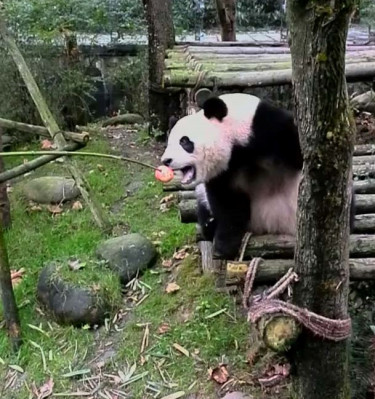 Dujiangyan Panda Base
Further out of town this centre is very close to Qingcheng Mountain scenic area, which is served by a railway connection from Chengdu via Dujiangyan. This centre is most notable for the panda volunteer program that was offered before the Covid outbreak. There are many videos on YouTube of people taking part in this programme and was the site of the Harry Potter actress, Miriam Margolyes' panda breakdown while making the BBC, Real Marigold on Tour program. This amusing incident can be seen here; https://www.bbc.co.uk/programmes/p05nr1nf . Hopefully, the volunteer program will again be reinstated in the future.
The get to the centres by public transport its best to get to Dujiangyan or Qingcheng by the high speed rail connection from Chengdu. Since no bus runs to Panda Valley you need to get a Taxi from Dujiangyan. Qingcheng Station is further up the line and a bus runs to the panda base – otherwise there will also be taxis here. 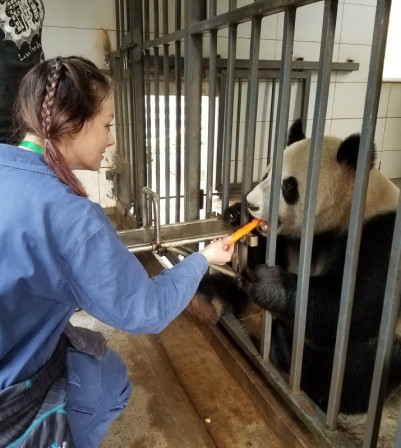 A client taking part in the Dujiangyan Panda Base volunteer program. One of the requirements to take part has been to have a medical examination carried out by a doctor - the idea being not to pass on an infection to the animals. Although we have seen other day volunteers who have turned up without this examination "energetically" argue their case with the volunteer staff it is something you must have to gaurantee a place. Our past clients have all been sent the medical forms prior to coming to China and have taken the examination with their regular doctors.