The Sichuan areas east of the Tibetan Plateau are also home to famous tourist attractions, which also include the Giant Panda Breeding Centres and Chengdu. The best known of these are Leshan Big Buddha and Emei Mountain, which are both a comfortable driving distance from Chengdu that would allow day visits. Reflecting Han tradition and history, these sites differ in ethnic character from the Tibetan culture found in the west. Also, travel is more comfortable – no altitude problems and an excellent selection of accommodation, restaurant and shopping choices. Sites listed here also include Zigong Dinosaur Museum, which is built on the site of large dinosaur excavation and claims to house the world’s biggest collection of dinosaur fossils and the fantastic Buddhist cliff carvings at Guangyuan. 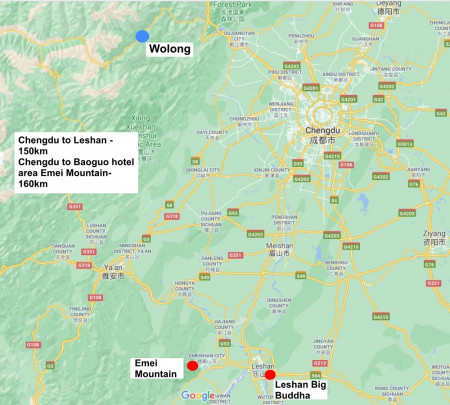 Leshan and Emei Mountain are 50 km apart and a visit to the sites can be combined. 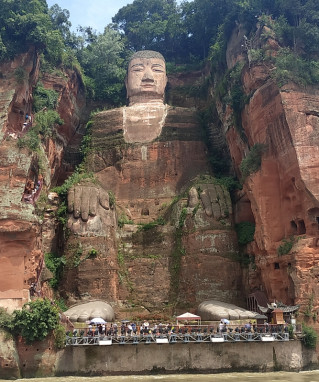 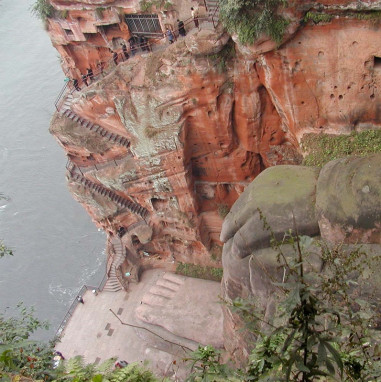 Leshan is large city with a population of over three million. Situated at the confluence of the Dadu and Minjiang rivers the rivers flow eastwards towards the Yangtze and the coast at Shanghai - an ancient trading waterway of huge importance. During the 8th century, construction of a huge Buddha effigy was started on red sandstone cliffs that overlook the meeting point of the two rivers. Its purpose reputedly being that of calming the fast-flowing waterway and helping boat traffic safely pass through this dangerous stretch. After a few setbacks, this huge project finally produced a 71-metre (233 ft) tall statue. To get an idea of how large this is, the copper figure of the statue of liberty is 46 m tall.  Now overtaken in size by a couple of modern built Buddha effigies, the Leshan statue is the largest historical statue. Interesting construction points include a complicated draining system, that has protected it from erosion, and evidence of a huge 13 storey structure that once enclosed the monument but was destroyed by invading Mongols. Today’s statue has received much renovation work – the necessity of this work will be apparent when viewing the highly eroded flanking statues from the river. 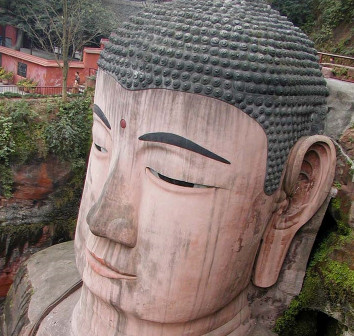 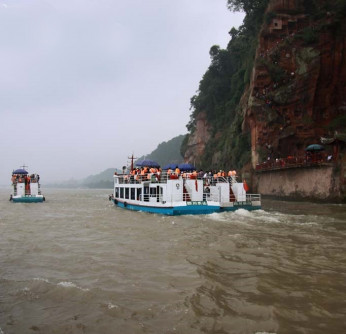 There are three ways of viewing Big Buddha. Simplest and quickest is to travel into Leshan City and get to the river that is directly opposite the monument. From there you view it from across the river. However, here the two rivers meet, and the stretch of water is very wide. Giving just distant views, binoculars are almost a necessity. Far better is to buy a ticket for a tourist boat that gives you a 20 minute sightseeing voyage. From the boat you get the best view of all, being able to see the whole Buddha and flanking statues as they were meant to be seen – from a boat on the river. There are many boats making this trip, they depart each time they are full. This is the quickest and most convenient way of viewing the Buddha – even during a slow period, when you have to wait for a boat to fill, or peak season when a surplus of visitors means a bit of a queue. The third way is going into the Big Buddha park and walking around the statue just as the original pilgrims and visitors would have. Although not getting the same entire, whole monument view as from the river, here you get the best idea of the sheer scale, especially when walking at the bottom around his massive toes and feet. A word of warning; those stairs, that wind around the statue, are long and steep, and the park can get very crowded, meaning patience and calm required in case of human bottlenecks. With many hotel and restaurant choices, Leshan town is a good place to stay. Far more relaxed than the bustle of Chengdu it’s a great place to sample Sichuan cuisine – especially noodle and dumpling type dishes. It also has a more local Sichuan feel than nearby Emei, which, around the mountain, is totally dominated by visitors and the tourist industry.

For independent travellers the quickest and most convenient way of reaching Leshan is via the high-speed rail link. The Chengdu terminus is the East Railway Station, with a journey of just over one hour to Leshan. This train passes through Chengdu Airport and it’s just a further 15 minutes ride to Emei. 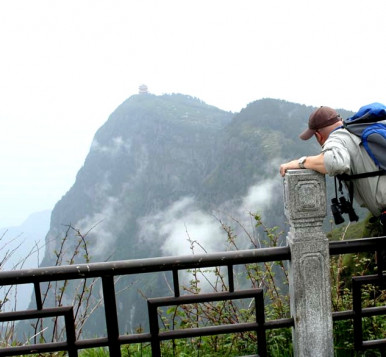 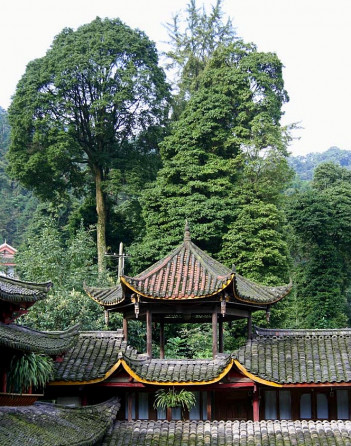 Also known as Emei Shan, is one of China’s four holy Buddhist mountains and together with the Leshan Big Budhha is a UNESCO World Heritage Site. Its Buddhist heritage is reflected in its many monasteries, nunneries and temples and some of these, especially handy for those who attempt a walk up the mountain, offer simple accommodation and food. Otherwise, the site has many other accommodation options, ranging from the most expensive luxury to budget backpacking. The summit is just over 3,000 metres (10,000 feet) in altitude and can be climbed by using a network of stone staircases. Depending on route and where you start, you are looking at a walk of between 40 to 60 kilometres to get from top to bottom, which, for most of us, is at least a two-day trek (after which you won’t want to see another staircase for an awful long time). Synonymous with this walk is the clank of bamboo walking poles against the multitude stone steps. Sold by local vendors and popular with Chinese tourists, these sticks also make goods defensive instruments against the troops of robber monkeys – Tibetan Macaques - that inhabit a couple of stretches of the route. However, for the less energetic there is also an easy way up to the summit – by public road, to a point around half-way up, and then transfer to park bus and a final stretch in huge cable cars. There are also other gates in-between this point and the lowest entrance gate, which also give you the chance to take shorter walks on the mountain. Many journey to the site to get to the summit at daybreak to watch the sunrise. It’s an interesting business, often involving large crowds, making it also a bit of a people watching experience! With the summit often being enveloped in mist, the weather also must play its part. But in the right conditions, when the summit pokes up though a layer of lower cloud, it can be a great sight. 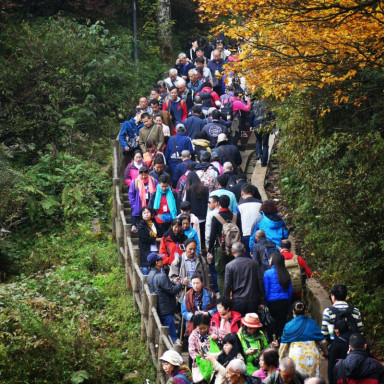 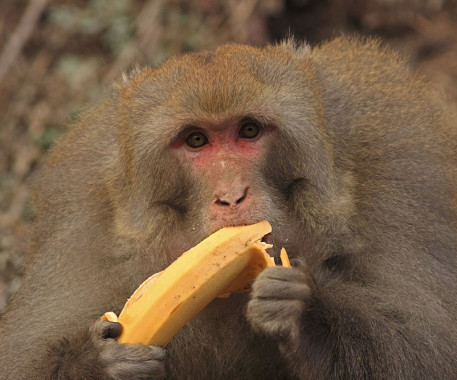 Access to the mountain is by ticket, although stretches of nice walkways, like the area at the bottom around Baogou Temple, are also found outside ticketed zones. Emei is a major tourist site, ranking up there with Jiuzhaigou and Big Buddha and during peak periods it attracts big crowds. However, just like Jiuzhaigou, most will be heading to well-known locations, especially the summit, and walking on paths that take you away from those will also bring you into quieter, less crowded spots. 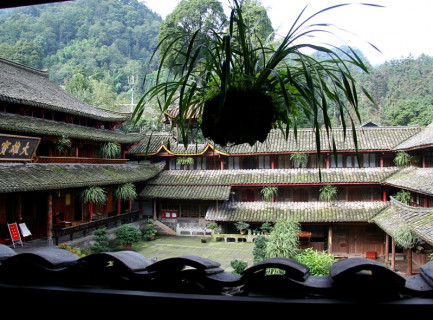 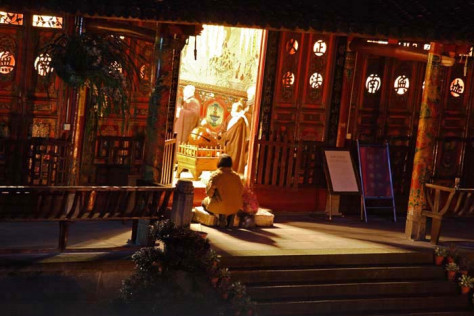 Emei City is a large, modern urban area with a population of over 400,000 and is well served by road and transport connections. Its linked to Chengdu by an hour-long high-speed rail service that also runs to Leshan. There’s a 15-minute ride between Emei and Leshan and the short distance can be an important factor when planning a visit. 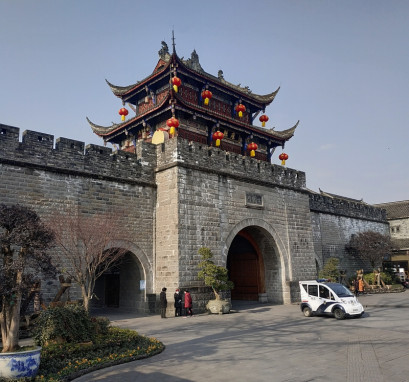 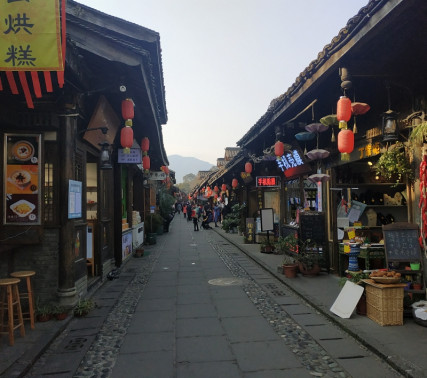 Dujiangyan lies on the route between Chengdu and Wolong. Designated within an area known as Greater Chengdu it’s a large town with a population of around 660,000. It’s also an important gateway to the Tibetan areas in the west, being the closest town, to places like Danba, Maerkang and Wenchuan, with good shopping, hospital and school facilities. When heading out west this is the last convenient stop to find ‘luxuries’ like cheese, KFC and banks that have ATM’s that accept foreign bankcards.  Dujiangyan also offers many tourist attractions, which include two Panda Centres and the UNESCO World Heritage sites of Qingcheng Mountain and Dujiangyan Irrigation System. Being just an hour and half’s drive from downtown Chengdu, it’s a very popular destination for the city and every weekend hordes of day trippers make use of the expressway and high-speed rail connection to escape into a far cleaner, greener environment. Being so close to Chengdu, with many of the same tourist facilities, but being far smaller, quieter and having plentiful accommodation within walking distance of green areas and UNESCO world heritage sites, Dujiangyan makes for an attractive alternative hotel base to the big city. 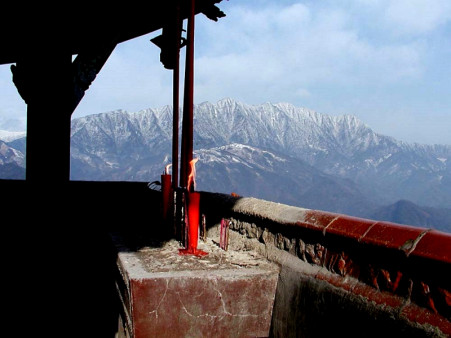 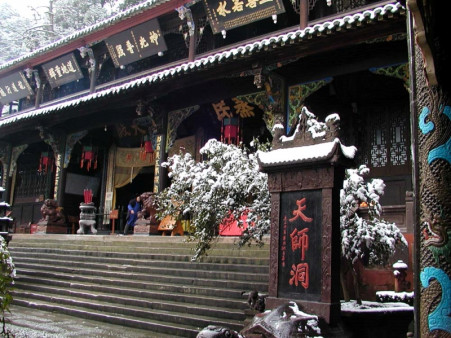 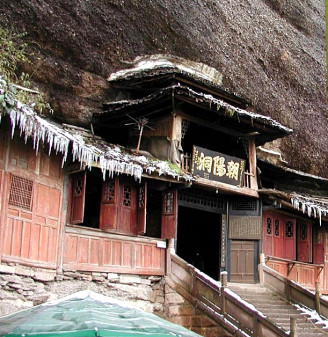 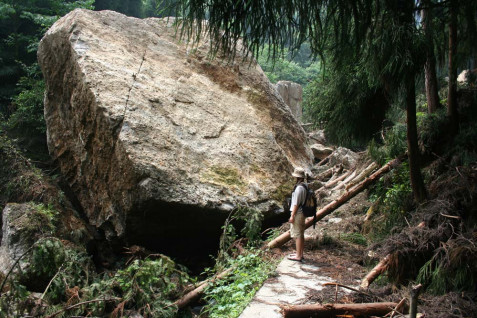 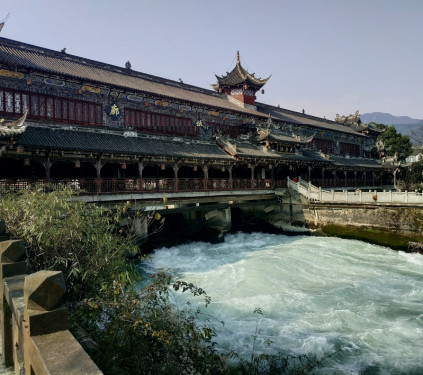 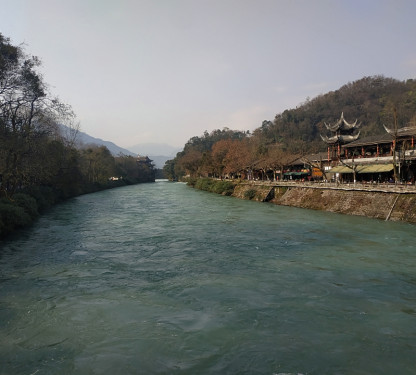 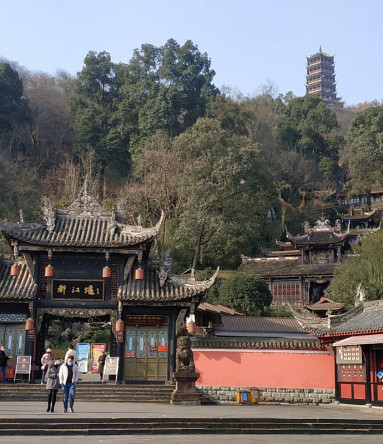 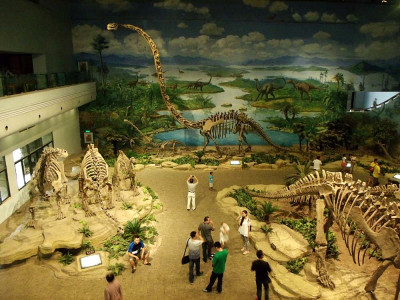 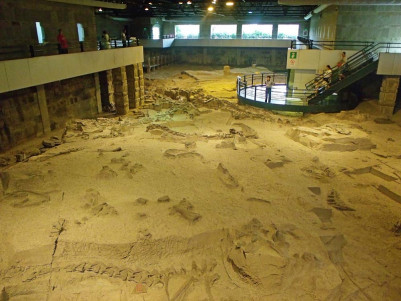