Finding Pandas in the Wild

Look carefully in the first photo and you can see a distant Giant Panda in a tree, The Red Panda feeding on berries is far easier to spot! Both are wild animals, pictures taken by Wan Fugui.

Red Panda is the easiest of the two animals, but we only commonly see this species during autumn months when animals readily feed on berry bushes and trees. The Red Panda is a great climber and at least 90% of our sightings come from seeing animals up trees. On the ground, especially in bamboo habitat, it can be difficult to spot.  Red pandas also sleep in trees, often on broad branches in large conifers.  But when motionless it is also difficult to find, since its colouration matches well to some of the richly coloured mosses found on the older mature trees. We use high powered spotting scopes to scan likely trees but even though we are sometimes lucky in seeing a sleeping animal its usually branch movement caused by active animals that’s the big give away to their presence. Red Panda usually moves at a steady conservative pace, almost always singly and always silently unlike the noisy, quick moving macaque troops that inhabit the same forests. They will readily climb large trees probably seeking out insects, larvae, bird nests and any edible vegetable matter. However, during autumn months our successful observation rate soars when we readily find daytime animals in open easy to view situation, climbing trees and shrubs in search of berries. They particularly like a type of berry that resembles a hip and once you know where these trees are found the search for Red Pandas becomes a lot easier. We also suspect some sleepy, lazy, wobbly behaving Red Pandas may get a little tipsy from eating over ripe fruit that has fermented to produce an alcohol content – this is a situation that has been observed in other fruit eating species. A good berry season can last from the end of September into the start of the new year. 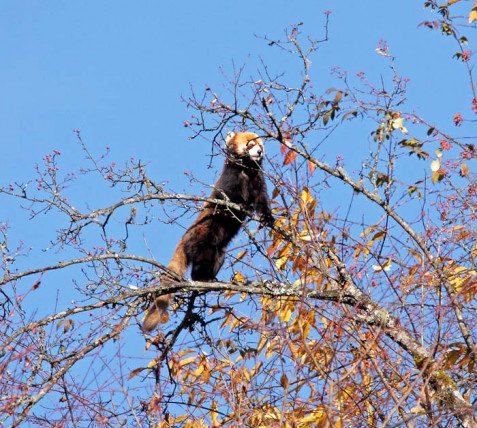 This photo illustrates how easily Red Panda can be seen when feeding on berries.

Giant Panda are obviously a lot more difficult to find, partly because of their rarity, but also because of their preferred feeding locations in deep dense bamboo, often found on extremely steep sided slopes. The best opportunities to see an animal come from either finding one up a tree or when they cross through an open area. Because the population density is so low, large areas have to be viewed to pick up these animals and, Just like the Red Panda watching, scanning suitable habitat from a distance, with high powered optics is the best way of doing this. In the trips we have been involved in, where wild Giant Panda is the focus animal, we have given at least 3 days for the scanning and have spent all daylight hours performing this task – and then you have to be lucky and the time watching an animal in the open can be very brief. But even if it is a long and often boring process its certainly a lot easier than trying to cover ground inside bamboo terrain, where visibility is very limited, going  is slow, difficult and sometimes dangerous, and in an area that is almost certainly out of bounds, since it will be  within a protected reserve area. Using a scope gets you over all of these problems by giving yourself a one- or two-kilometre distance and the ability to stand in a safe, easy to reach public area outside any reserve boundaries. The best seasons for Giant Panda watching are winter, spring and autumn and during 2019 we were involved with several sightings, at two different sites, that involved the methods described here. 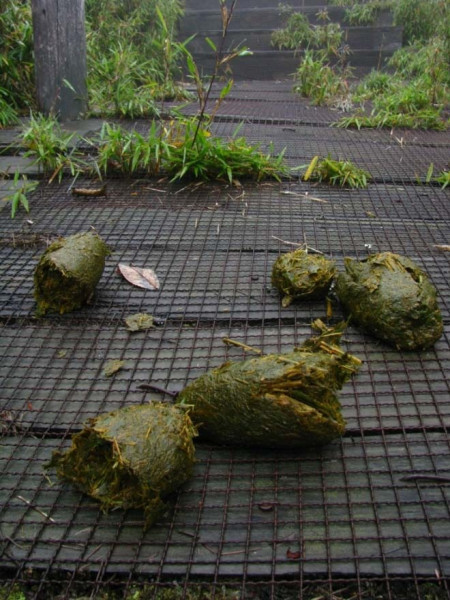 the presence of Giant Panda is often indicated by skat signs. These droppings are very fresh from an animal that regularly walked on a wooden path to get between areas of bamboo. Unfortunately we never got to see the animal which became completely invisible and impossible to find once going into the bamboo 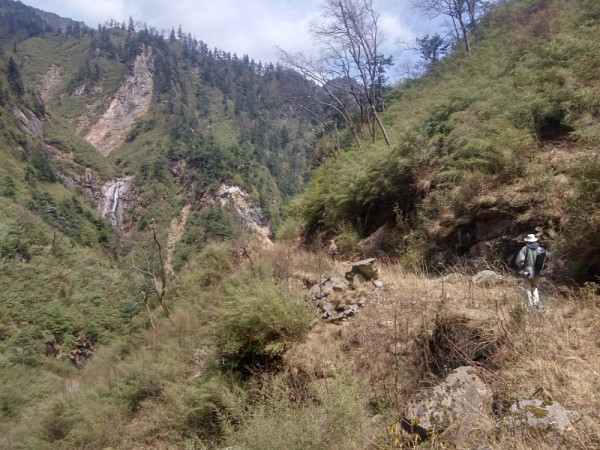 We recommend that any visitors who come to Sichuan with the intention of watching wildlife have at least a pair of binoculars. Good spotting scopes that will give the kind of definition, at high magnification levels, that can pick out animals at long range are far more expensive items of equipment. However, good wildlife guides should have one, using it to find animals and birds for their clients.