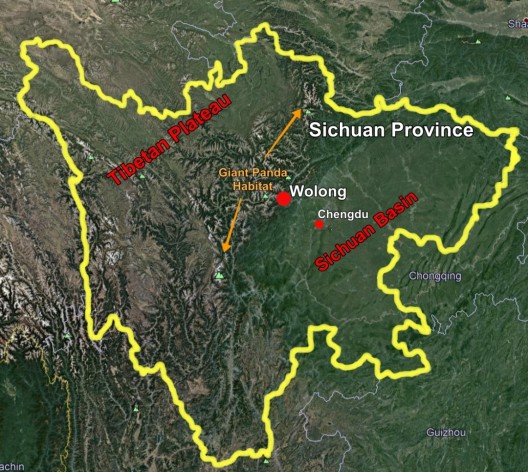 Sichuan Province is made up of two main geographic features. To the east we have a flat low-lying area, The Sichuan Basin sometimes called the Sichuan Plain. Chengdu, the provincial capital is situated in the basin, together with the majority of the population, industry and crop agriculture. The basin is bordered by higher ground and to the west this feature is made up of mountain ranges that form the eastern edge of the Tibetan Plateau.  Wolong, around two hours' drive from Chengdu Airport, lies in the shadows of these uplands, which also, on their lower forested slopes contain the last areas of Giant Panda habitat (click on map to expand). 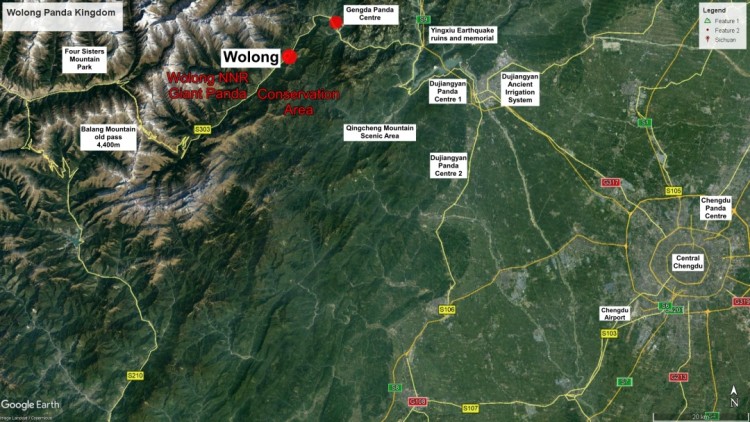 Wolong lies to the northwest of Chengdu, the route passing by the historic tourist town of Dujiangyan, that contains the UNESCO World Heritage Dujiangyan Irrigation System, Qingcheng Mountains scenic area and important Daoist site, and two Giant Panda centres. Much of the Journey is on express highway and Wolong Village is usually around a two hour drive from Chengdu Airport. Wolong situated in a river valley, that lies at the heart of the Wolong National Nature Reserve, is just 20 minutes' drive from Gengda Giant Panda Centre. The drive west over Balang Mountain takes you through exquisite countryside and prime Giant Panda habitat but the terrain leading to areas of extensive bamboo is so extreme that wild panda watching is a very difficult undertaking. This road rises onto Balang mountain which peaks just below the five-thousand-meter mark. Now a tunnel cuts through the mountain but formerly there was a winding pass that led up to a highpoint of four thousand, four hundred metres and can still be accessed. On the western side of Balang there are the impressive peaks of the Four Sisters mountain range (click on map to expand).